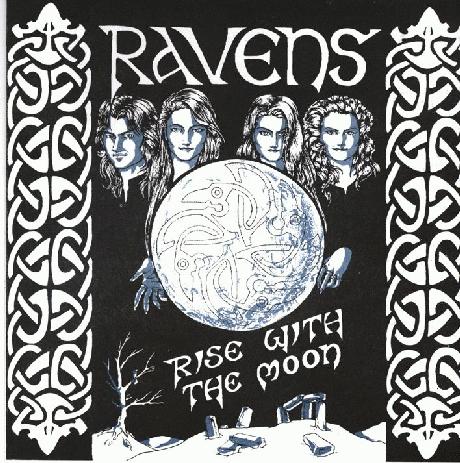 Welcome to the Ravens Home Page!
Ravens is a Neo-Celtic Band with an Edge based in the Dallas/Denton Texas area that started out in 1992; they have been performing at conventions, rennaisance fairs, clubs and other functions throughout Texas, Oklahoma and Missouri.

Ravens CD Rise With the Moon has been a huge success, selling out it's run of cassettes and CDs. Catt's original song on the CD 'Battle Raven' is printed here along with some chords.

No performances are scheduled at this time and will not be as Ravens has disbanded. Keep an eye on this page for any more updates!

New addition to the web site--Check this out!

YOU get to put in your vote on which promo shot you like best. Ravens has had several band promo pictures taken and are asking for your input! Check out the picts in the following links and send in your vote! (Include all comments/votes in one note please, I only have one lifetime to count all these. ;) )

For more information or to make any suggestions (within reason of course ;) ) Use our handy form!

Links to some friends of Ravens!

Performances you should not have missed!:

Hudson's Grill located at Trinity Mills and Old Denton Rd. in Carrolton, Texas on Friday, March 14, 1997 from 7pm-9pm (or until they fall over)(they did not fall over!).

Barnes and Noble in Norman, Oklahoma on Saturday, March 15, 1997 from 4pm-7pm (that was St. Patricks day weekend).

George Wesby's Restaurant and Pub at 2713 Commerce @ Crowdus St. in Deep Ellum has closed so there will be no more performances there.

online! If there are pictures or other information that you have that you would like to see at this link please send them to me!

An online ordering form for CD's

($12.00)! (For more information drop me a line). (This will probably be a while. As a subset of my site, an online interactive order form is not possible. Not to mention we would have to get linked up to a credit card system and that is not cheap.)

On October 18, '96 a friend of ours, John "Doc" Ezell, was involved in an automobile accident and we, with the help of our fan club The Death and the I.K.E., staged a benefit concert on October 25, 1996 and raised over $1100.00 to assist in his and his family's bills. We would appreciate any additional help you could provide. To find out more about what can be done, drop me a note

If you have any ideas regarding what you would like to see here or questions about CD's or tapes or T-Shirts, Use our handy form.

It's difficult to say when (and where) Ravens first hatched (get it?), but the three founding members occasionally think it was in november 1991 at the Dallas Fantasy Faire when Teresa Patterson said EEEK! I need a half-time show for the masquerade!!' Always at the ready to help out a friend, Gypsy Youngraven, Sessa Kay, Catt Kingsgrave-Ernstein, and Elaine Fisher (who doesn't figure into the rest of the story, but is nice and therefore deserving of a little recognition [*kisskiss*]) said We'll do it!' They even managed to convince (perhaps coerce?) Tim on stage to sing a song about fighter pilots (foreshadowing or destiny? You be the judge). At some point in time, between Sessa pushing Gypsy off a chair and Catt flinging green paint at everyone(she was dressed as She-Hulk')an idea was conceived--the idea that three women could form a Neo- Celtic band and play a renfaire--Scarborough Faire, in fact. Which is exactly what they did, thus hatching (you get the point) Ravens. At first, Sessa, Catt, and Gypsy had toyed with the idea of touring renfaires across the country. Then ugly realities set in. Realities like: no running water, living in tents for months (a weekend is one thing, but a month??? Yikes!), not to mention leaving college which was a definite no-no, and in Catt's case, leaving husband--which was an even more definite no-no. So Ravens decided to find venues a bit closer to roof and roost. And find them they did. Since 1992 Ravens has played throughout the Denton and Dallas area, and occasionally travelled to other states. Tim began playing with them as a guest in 1993, when our heroes realised that Gypsy's bodhran, though lovely, was simply not enough percussion. Eventually Tim was coerced--er...convinced to become a fullfledged (ha) Raven.
In 1994, with the help of producer Keith Kubal, Ravens released its first CD, Rise With the Moon. Rise With the Moon is a peaceful coexistence of Celtic, folk, and original music with added depth provided by guest artist Linda Relph. We also included some live sets because we think our fans are superb. The CD cover, created by Tim Collier, is featured on this website--look at it, it's beautiful, don't you agree? In fact, it's all so beautiful that you want one, don't you? And if, by chance, you should have one (we love you), you feel an overwhelming desire to give one to a friend.
Back to our story. Unfortunately, life intervenes sometimes and makes things interesting. In our heroes' case life took the form of university, work, and managing an art studio. Despite these time consuming ventures, Ravens managed to stick together (with a few much needed breaks) and are even now preparing to take the world (starting with Deep Ellum) by storm. There has been talk with fellow Celtic band, Ceili's Muse, about doing shows in Houston, and Ravens are even starting to ponder their next CD, tentatively titled Grave Undertakings.
But...our story is not quite over. During its last hiatus, the band looked at itself and said I seem to be missing something.' Like any good band it watched other bands, searching for the missing element. Then, one night, it made a discovery. That discovery, was a small brown instrument that its player appeared to be sawing in half. Oh, of course,' the band said to itself. We need a fiddle player!' So it began to look around until it found one of the best fiddle players in the area and... on the 29th of march at George Wesby's Pub, Michelle Feldman played with Ravens for the first of(hopefully) many times. And the crowd went wild.
Nests: Past and Present
This is a list of all the wonderful places we've been. Please, share with us this moment of nostalgia.


We most sincerely hope we haven't left anyone out, and if we have done--please email Shaddow and tell him. He'll most certainly relay the message to us. This list will, of course, be updated as we add venues.

has been singing for around 9 years, ever since she thought it might be neat to be in a choir. She has appeared in numerous choir productions, as well as productions of Godspell and Free to be You and Me. Her musical influences include such diverse elements as Happy Rhodes, Manhatten Transfer, Billy Joel, and many dead, white European males(Bach, Chopin, Mozart...). Ms. Kay is currently working on a social work degree.

began playing percussion in 1981, and was told that he had no real future in music. Despite this, he spent seven years backing his school band, winning several awards and becoming a Tympanist in the Division XX All-Region Band. Mr. Collier spent three years playing tympani and tabor music at Scarborough Faire. Mr. Collier also played in Avatar with Ms. Kingsgrave-Ernstein. Mr. Collier was a member of Hawkwood's Enchanted Aires, and performed with the Omni Madrigals last Christmas. A long-suffering tenor, and self-proclaimed ninja-muppet drummer' (wait until you see them on stage...), Mr. Collier pulls his musical inspiration from such diverse sources as Michael Crawford, Shriekback, Danny Elfman, various Celtic artists, and the Kodo drummers of Japan.

This page written and maintained by Shaddow Walter